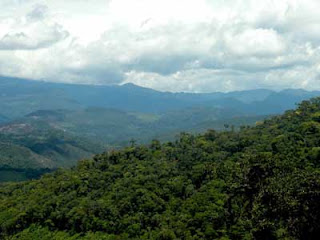 Hola! I am working here for the year as sustainable development coordinator for Neotropical Primate Conservation (NPC), an organization working to conserve the remaining habitat of the critically endangered yellow tailed woolly monkey.

I first arrived in the capital, Lima, over 2 months ago, and began the long journey to the village I have been working in. It was a 27 hours bus ride from Lima to Moyobamba, but the bus was really comfortable and as soon as the Peruvian couple sitting across the aisle and I realized we were each carrying a guitar and wearing New Balance shoes, I had good company for the long ride! Once in Moyobamba, I met up with the directors of NPC, as they were in town to give a presentation on wildlife trafficking. Coincidentally, the staff of the hostel we stayed at found a pet baby woolly monkey in one of the rooms the following morning. The trafficking of primates is unfortunately very common in the region. We transported the baby to a primate sanctuary in town, where it will be rehabilitated and hopefully released back into the wild at some point.

After first arriving in the village, La Esperanza – a few hours from Moyobamba – I met my housemate, a biologist from Lima who has been working with NPC for the past year. We set off to the forest that evening to monitor the Andean owl monkey, a nocturnal [meaning no photos - Ed.] primate species endemic to this region of Peru. We regularly observe a family of six that live in a small forest fragment near the village. They are extremely quiet travelers, and can be quite difficult to find, but luckily we found them and I spent my first night out in the forest!

After a few nights of monitoring the night monkeys, we set off with two Peruvian guides to find yellow tailed woolly monkeys in a forest area located a few hours walk from the village. The walk is a mixture of extreme downhills, uphills, and a lot of mud – although this turned out to be nothing compared to the challenging terrain at the actual site! The yellow tailed woolly monkey is also endemic to this region of Peru and is actually on the list of the 25 most endangered primates species in the world. We spent two full days searching the steep mountainsides for signs of monkey life, and finally found a group at the end of the second day. 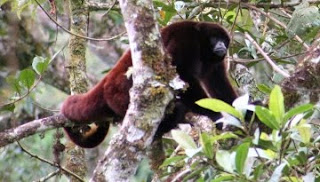 They are magnificent animals, with a thick reddish brown coat to cope with the relatively high altitude (1500-2100 m) and corresponding chilly climate. We are following groups in the area to gain a sense of behavioral patterns for this largely unstudied species, and NPC has been mapping out all remaining populations in Peru.

Another 3 hour hike back to La Esperanza and much needed shower later, and we were ready to set off again, but this time to the town of Chachapoyas. The University of Cajamarca had organized a Sustainable Development Conference, and we were scheduled to run half of the practical field course day. I met a few Peruvians working for a different conservation organization, focused on conserving Titi monkey habitat in the same region. We learned from experts who talked (of course all in Spanish!) about the economic valuation of nature, relationship between nature and indigenous cultures in the region, applications of GIS technology, diversity of bird species in Peru – to name a few things. On the final day, I helped the co–director of NPC run part of the field skills course, where we taught census methods, distance estimation, and GPS and binocular use in a forest reserve two hours away.

After the conference ended, I headed off with three new Peruvian friends to visit Kuelap, 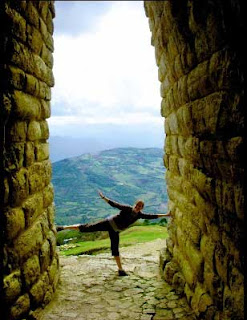 an archaeological site where the Chachapoyas (People of the Clouds) used to live before the Incas conquered the region. I traveled back to Tarapoto with one of my companions, an anthropologist, and stayed at her house before briefly returning to the States for my scholarship interviews.

Now that I have been back in Peru for almost a month, I am already finding myself busy splitting my time between the forest to monitor primate groups, villages to visit schools for environmental education activities, and the office to apply for grants to support community driven sustainable development opportunities. I had several highlights my first week back: realizing that I still have some volleyball skill left while playing with some local women while staying with a friend in Tarapoto, having amazing meals because a friend of one of the directors – a professional chef – visited for the week, and coincidentally meeting a good friend of the couple with the guitars I met on my first trip out. Now I have to visit all of them in Rioja at some point so we can all play guitar/sing together!

I actually had my first "mini concert" three weeks ago at a graduation ceremony for 5 year olds, where they all dressed up in suits and prom-esque gowns to celebrate the end of their first two years of school and official entrance into primary school. I was disappointed that I didn't have time to learn any Spanish songs beforehand, but at least they understood the word hallelujah that repeatedly came up in one of the songs! I’m currently developing lyrics and guitar chords to a yellow tailed woolly monkey (well, mono choro cola amarillo) song, which I hope to sing with kids in schools!

My second week back, we went out to the forest for my second 5-day spree with the yellow tailed woolly monkeys. Unfortunately this time they were acting more like wily monkeys; we found them on the morning of the very last day, but they managed to lose us after our 4-hour pursuit up steep mountain terrain!

Last week we traveled to a few different villages– some which can only be reached on foot – to carry out censuses of wildlife with Peruvian specialists and do environmental education activities at the schools. In one of these activities, the kids colored in different masks of animals that live in Peru, and we discussed where the animals live, what they eat, interesting behavior, and why it’s important to protect their forest habitat.

Now that I’ve been back to La Esperanza for a few days now, I’ve had chance to finally focus more on my main role with the organization – to promote opportunities for sustainable development in the region. This means searching for funding to support community projects growing Sacha inchi, producing dry fruits, making handicrafts, and developing ecotourism, as well as establishing contacts within and outside Peru to help develop such programs. I am focusing my initial efforts on developing the production of Sacha Inchi, as the variety in this region has high market potential and naturally grows well alongside reforestation efforts. Progress was challenging this past weekend with just one hour of power/internet per day; however, the heavy Monday night rains assured that we will have solid hydroelectric power for the next few days at least. This has allowed me to finish an executive summary of Sacha Inchi production in the region, begin setting up meetings in Lima for mid-January, and start contacting foundations for funding opportunities.

Of course there have been quite a few challenges along the way - 14 eggs in 3 days (and the 25 last week) isn't exactly making me feel the healthiest, my nearly 100 bites from a combination of mosquitoes and using a flea infested sleeping bag for a few days in the forest is getting a bit tiresome, my far from perfect Spanish sometimes makes communication difficult, and I've certainly had many difficult extremely steep and muddy hikes (and naturally accompanying bruises, blisters, and lots of laundry)! It keeps me on my toes though, and is a tiny price to pay for the many positive experiences I’ve had working here.

I've already had the opportunity to make so many valuable connections with people working towards environmental justice in villages and through organizations. Last week, I stayed with a family for a night in a remote village called La Primavera to do environmental education activities in the school. The father Eugenio produces coffee in a cooperative and they direct much of their additional effort to planting native tree species in their village. They're up to over 2,500 new trees now. His brother José, who came over for dinner, has developed a society for the defense of nature in the village in response to the tragic clashes between police and indigenous communities in Bagua last year over the economic development of their land. José’s group does environmental education and reforestation activities in the village and surrounding area. It's truly inspiring to meet such dedicated people, and lights even more of a fire underneath me to search for opportunities that can provide support for such efforts.

In the coming days, I will be continuing with internet work and night monkey monitoring, and celebrating the holidays with the other volunteers here by playing with kids in the village and eating Panetón, a traditional Peruvian Christmas cake!

[Editor's note: Josie is a 2010 IBHonors grad, currently taking a "gap year" before beginning a two year Marshall Scholarship at Edinburgh and Cambridge Universities]
Posted by The Integrator at 9:15 PM

IB Honors is a program within the School of Integrative Biology at the University of Illinois, catering to some of the best and most passionate biology students in the world. This blog was created to allow students and others associated with IBH to let the rest of the world know what is going on in the program. Read, enjoy, and please feel free to post a comment.